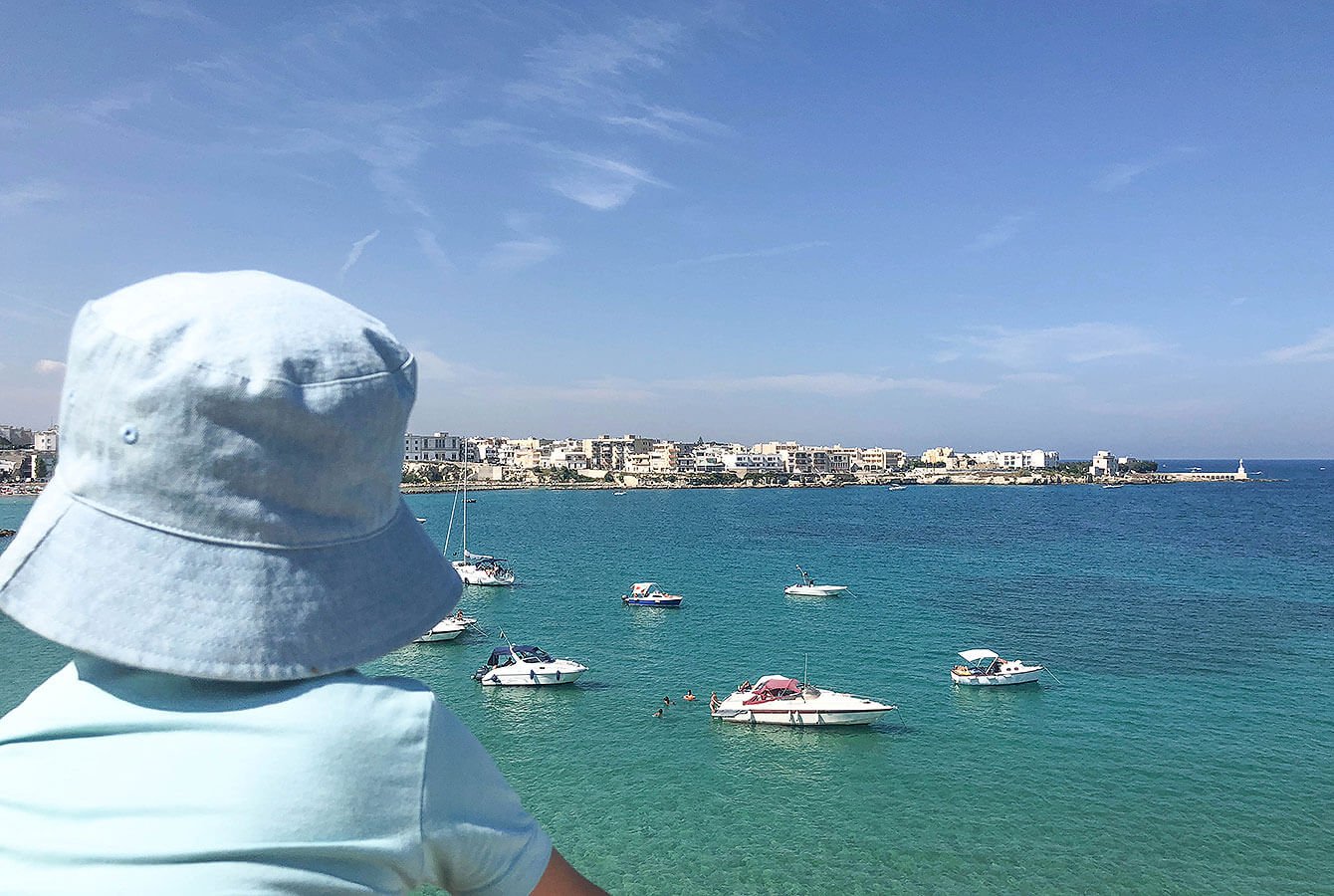 View from the castle over Otranto bay

Otranto old town has so much character, history and beauty within it,  that words do not really do it justice. And this is why I have decided to show you Otranto’s old town in a photo guide with some limited explanations.

Sit back and dive into this beautiful part of Otranto. I hope you like it!!

Otranto is a coastal town in southern Italy’s Apulia region in the province of Lecce. It has a nice holiday feel to it and one can easily stay for a few days or just make a day visit. 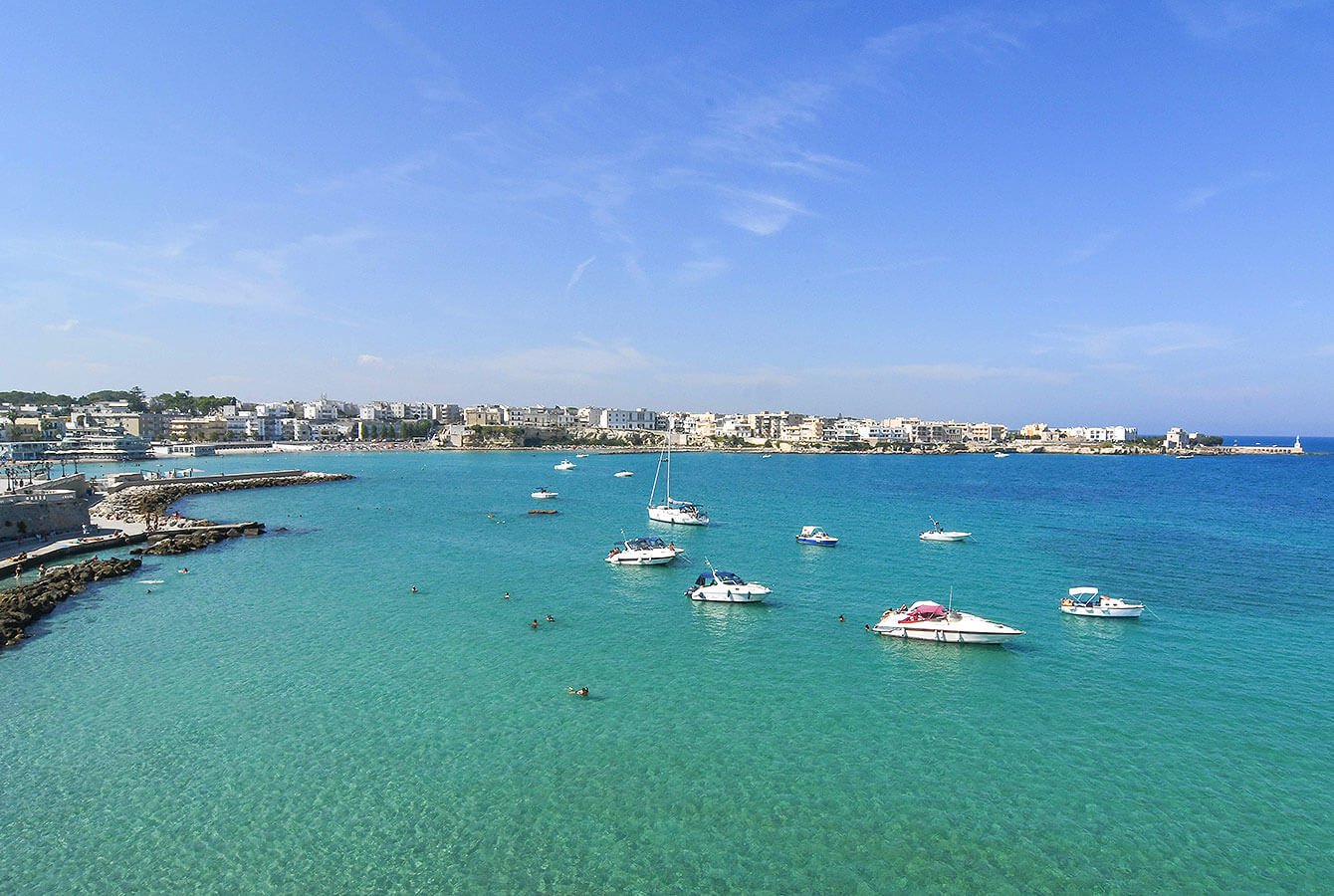 Before entering the walls of the old town enjoy the piazza in front with its white stone and historical monument of Agli Eroi overlooking it. 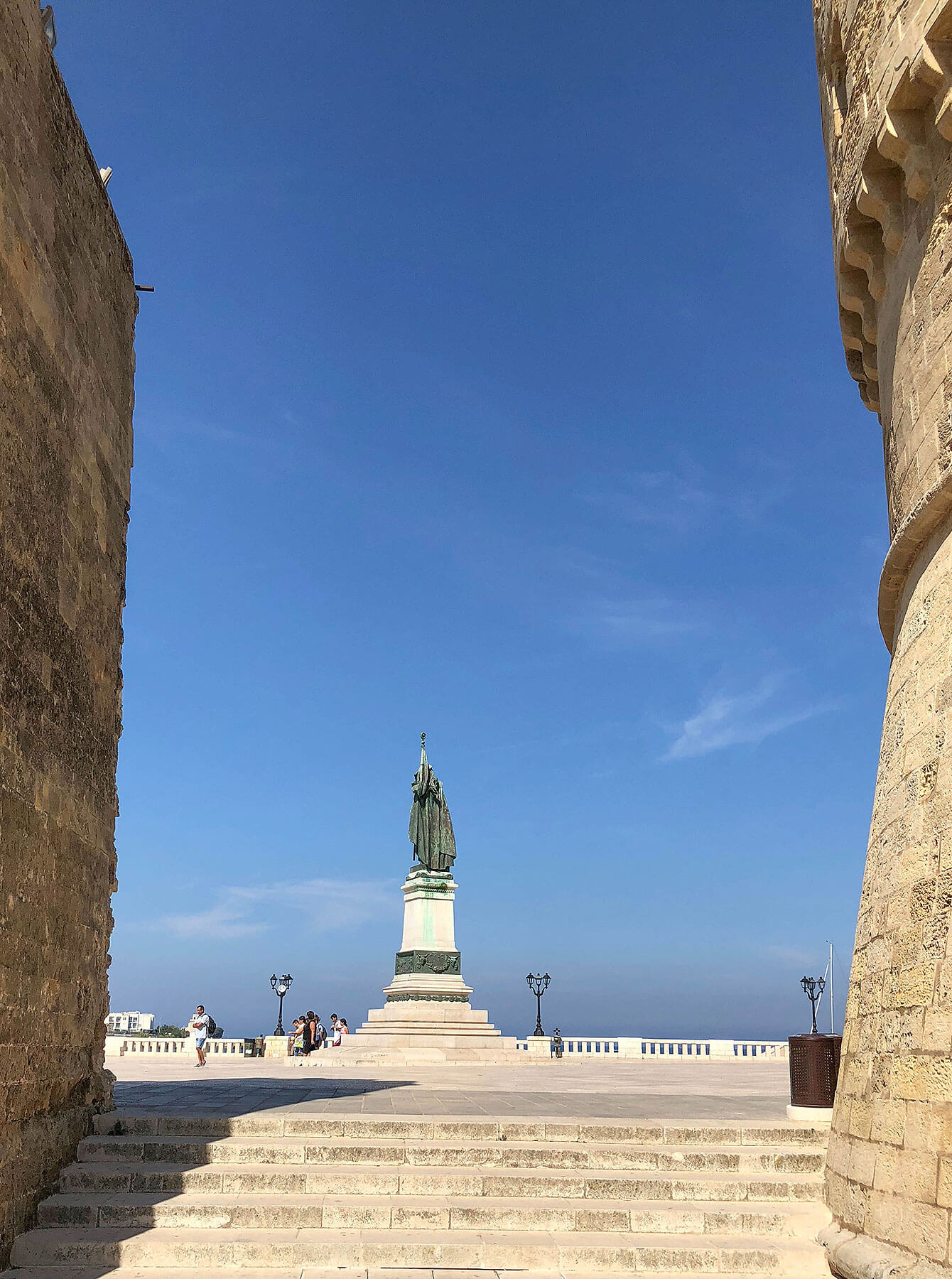 A shaded mini park with a children’s playground makes a perfect stop for your little ones before they enter into history. 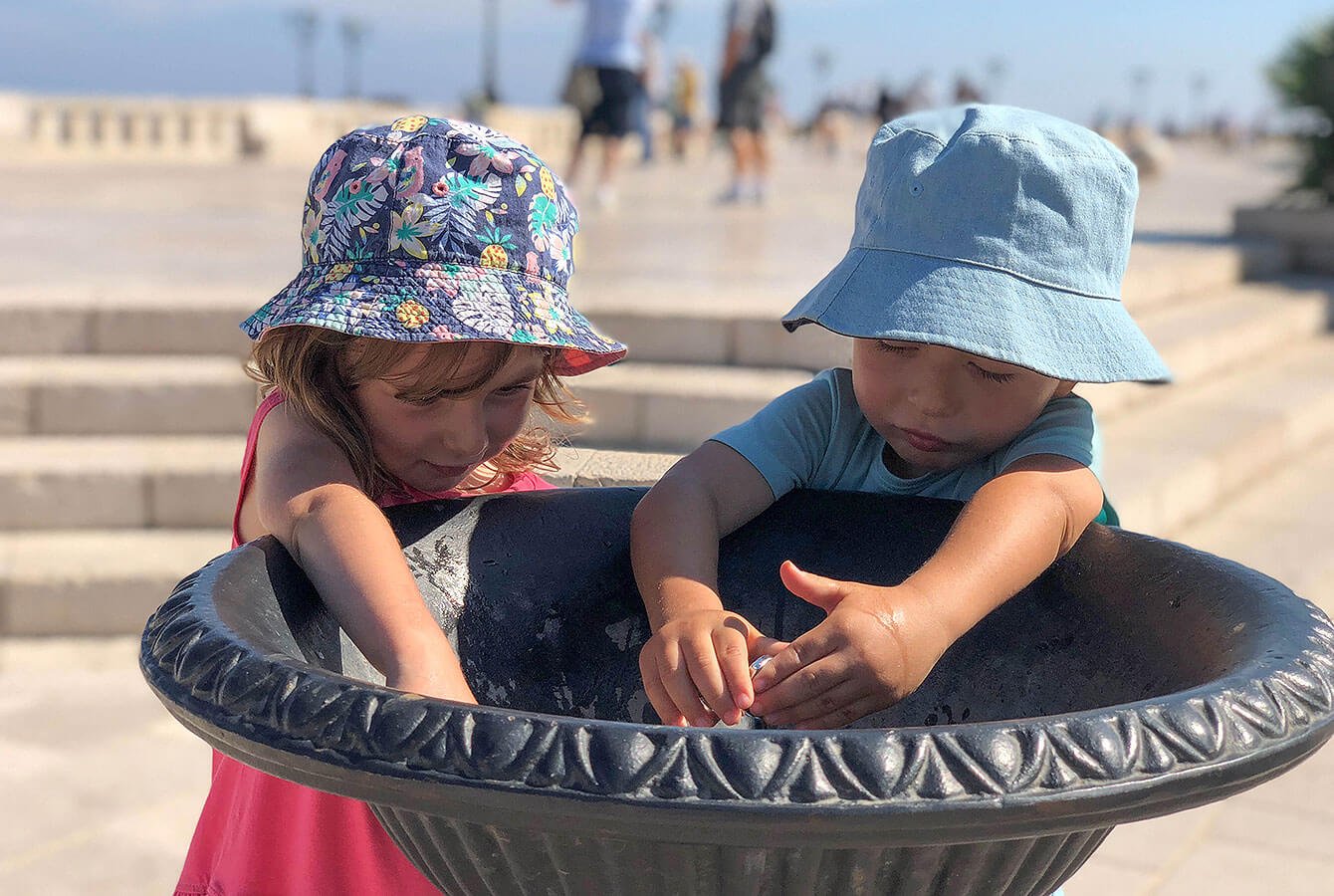 The focus of the town is Otranto’s old section. 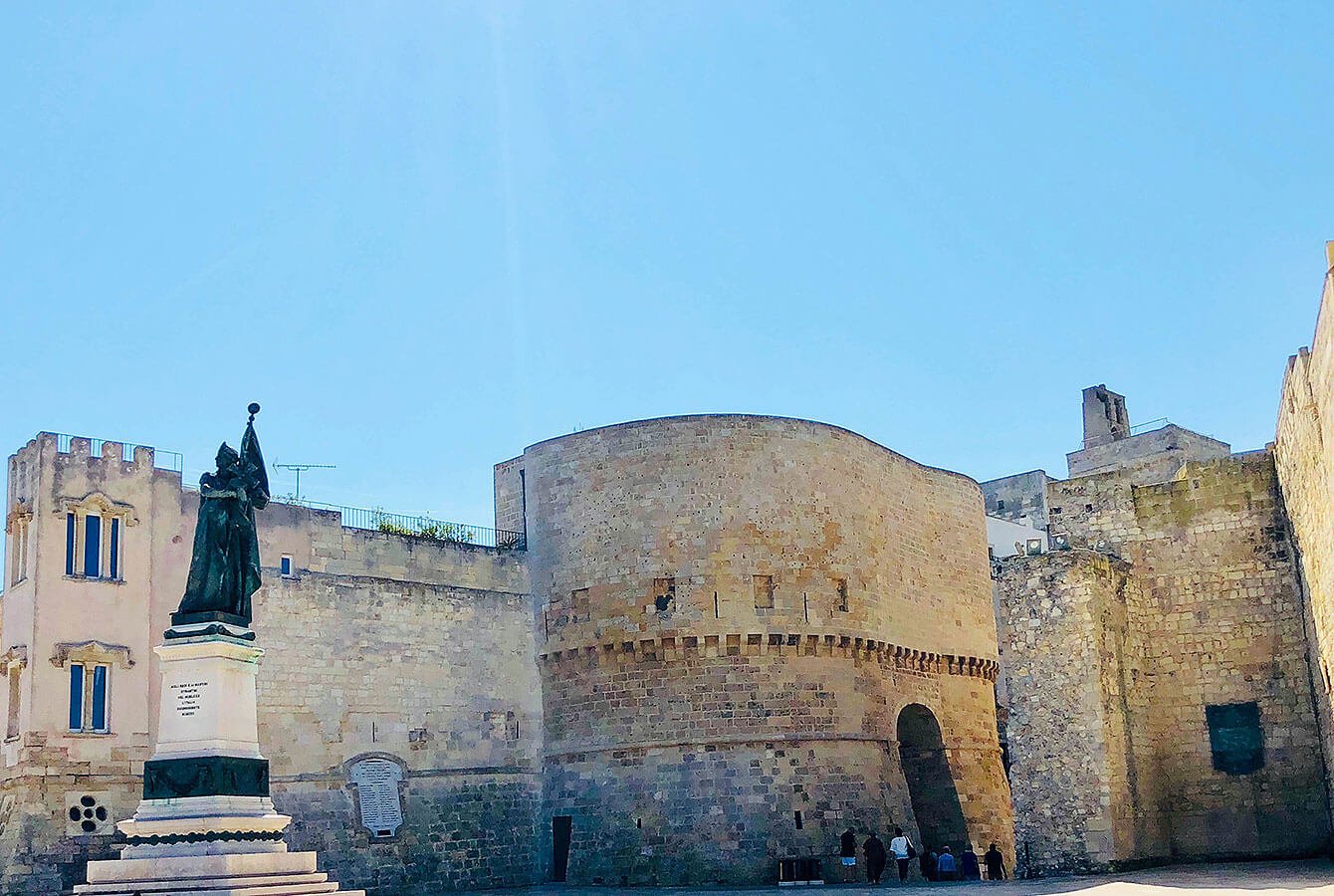 Featuring the 11th-century Otranto Cathedral, with a rose window and ornate mosaic flooring and the 15th-century Aragonese Castle. 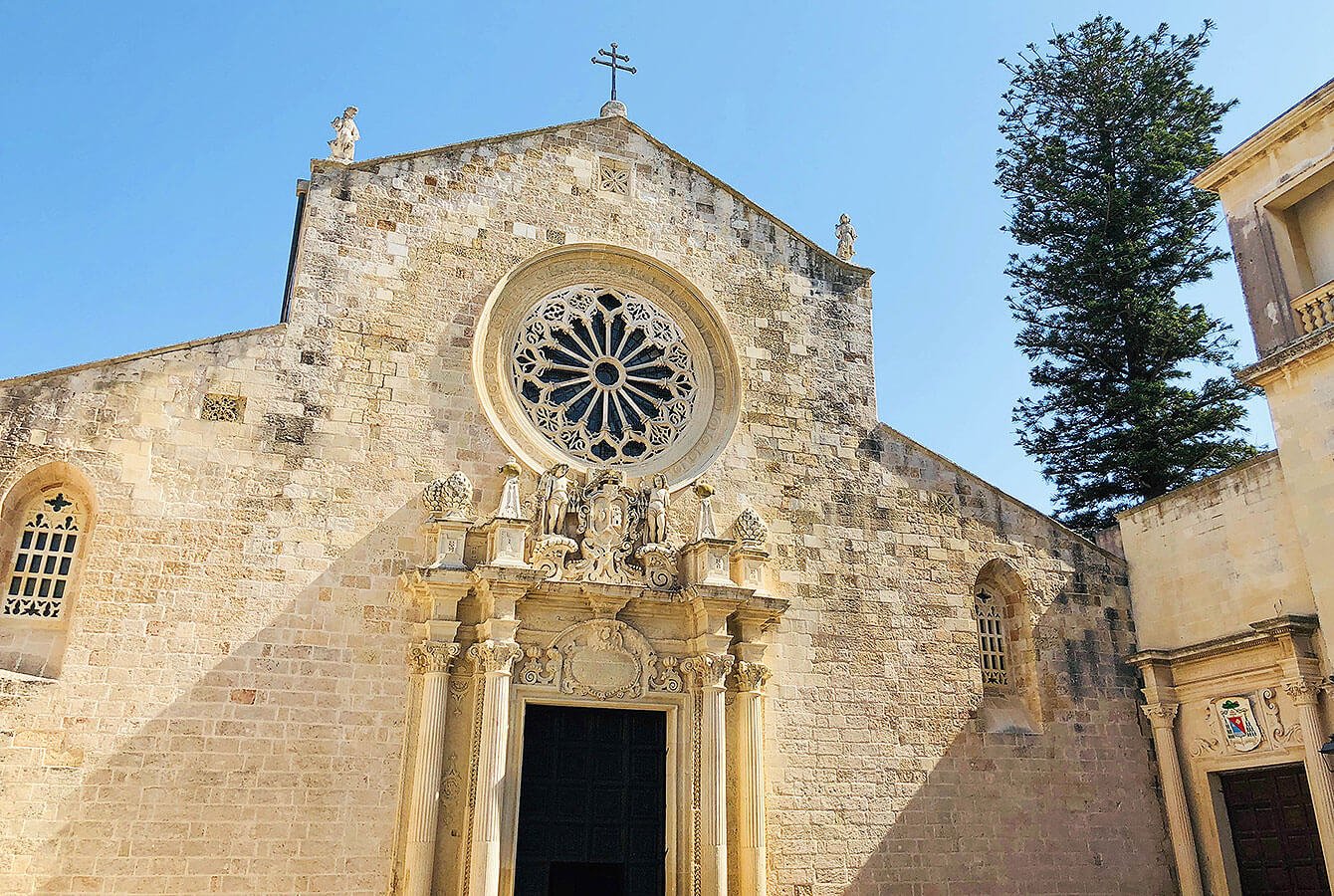 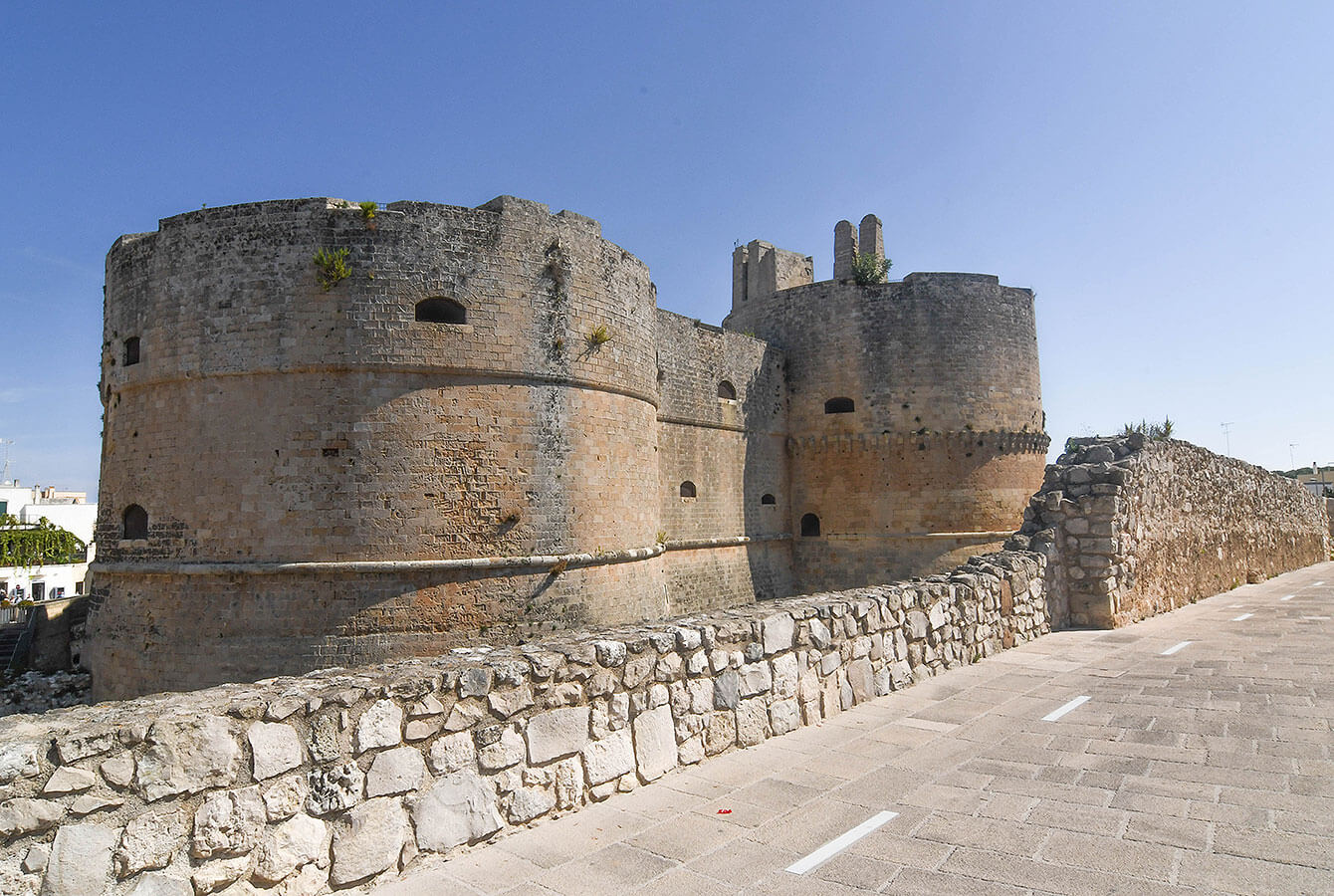 A bit of history about the Castle

The south of Italy was the object of a Turkish attack in 1480 and the castle needed to be rebuilt after the liberation. Today we observe a configuration which is the result of constant modifications that affected the fortress throughout the 16th-century. It needed to be adapted to the refinement of the firearms. Bordered on all sides by a deep moat and surmounted by a bridge to enter.
The basement has an intricate tunnel system which was originally the castles defense system, now fully restored and can be visited.

What to expect in Otranto’s old town 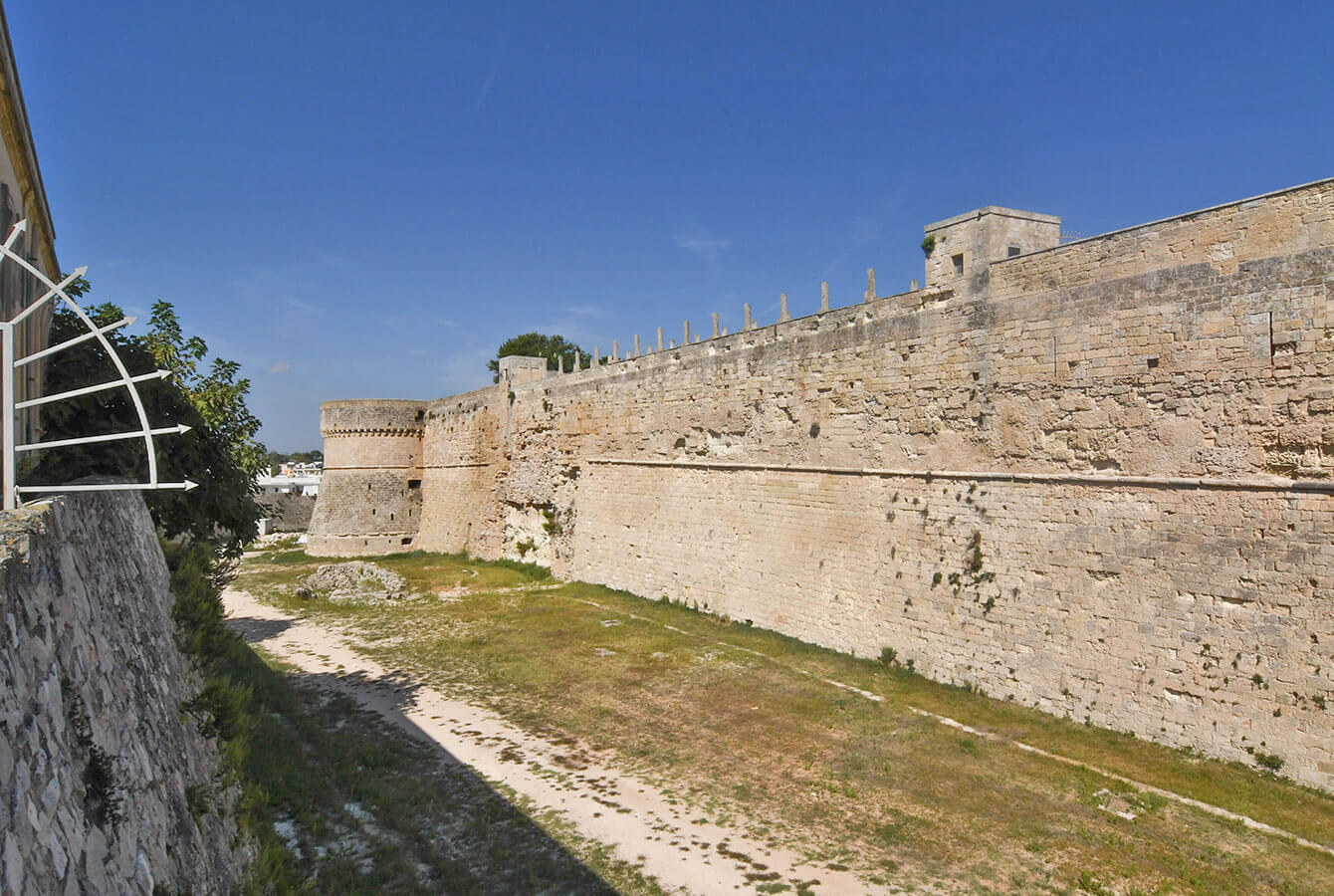 The centre of Otranto’s old town is still enclosed within its defensive walls, which gives a real sense of history. 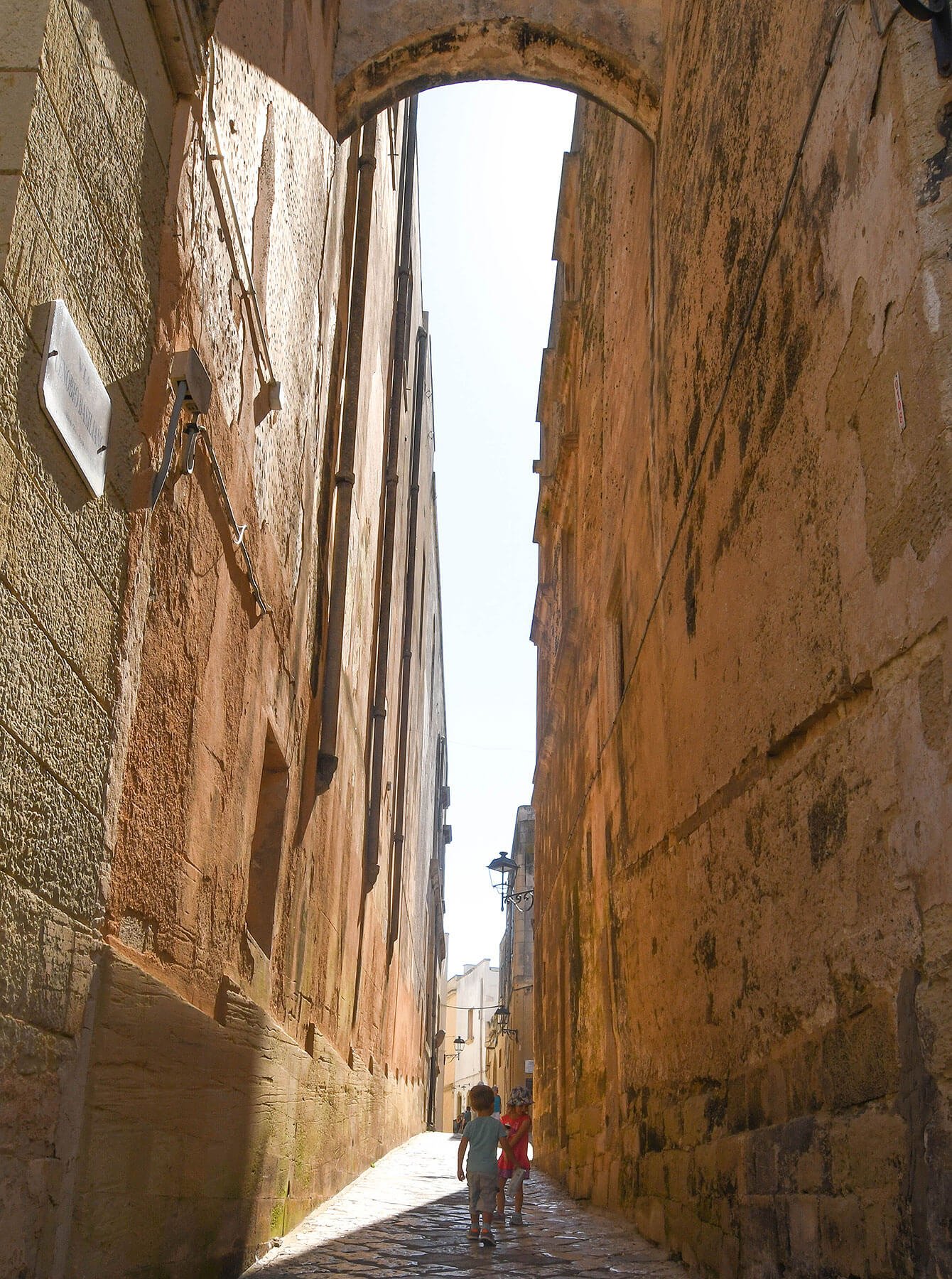 Take your time and discover the tiny alleyways, let yourself carry away back to the 15thcentury. 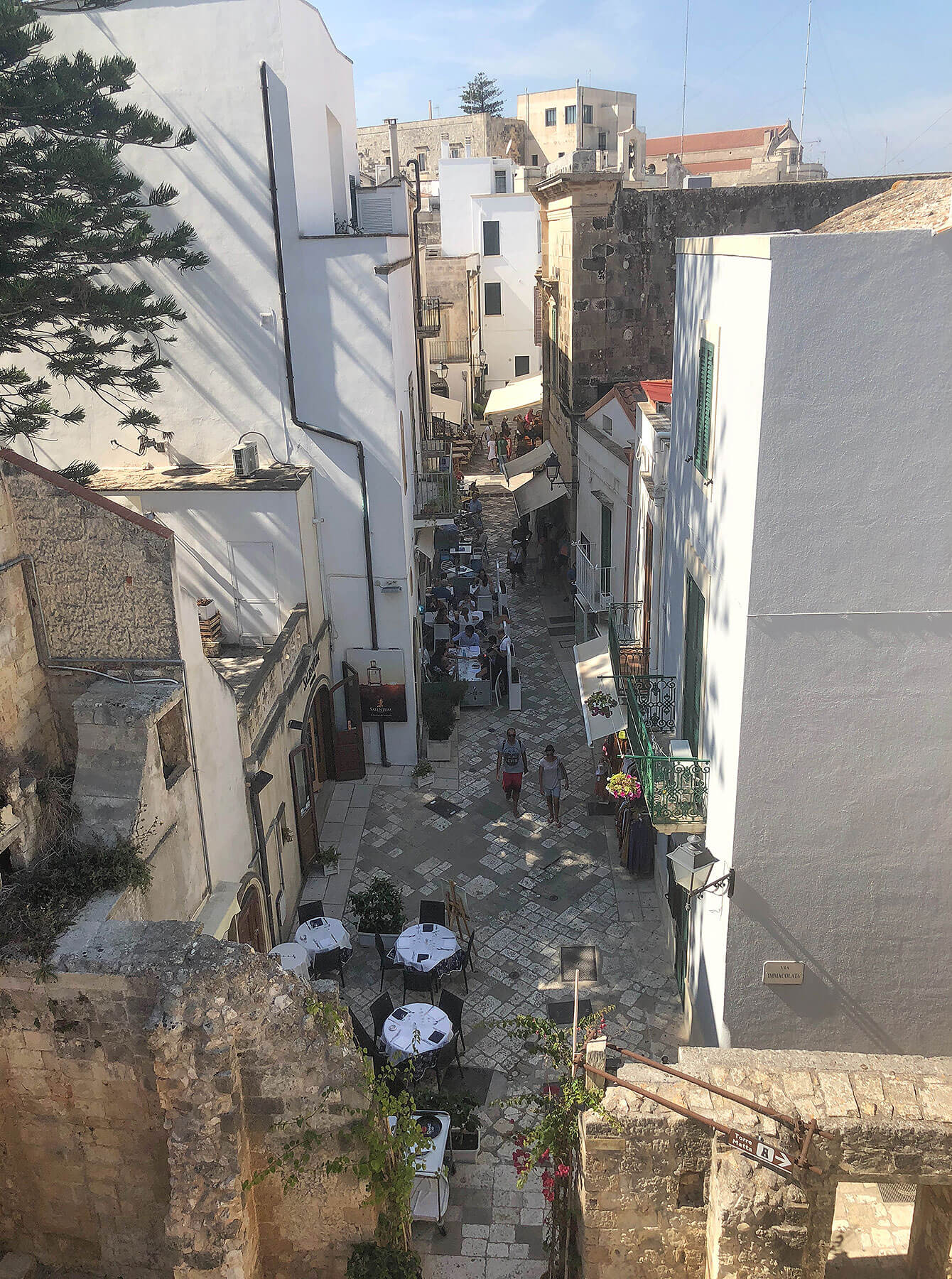 At each corner the white city stone walls are telling you a story. 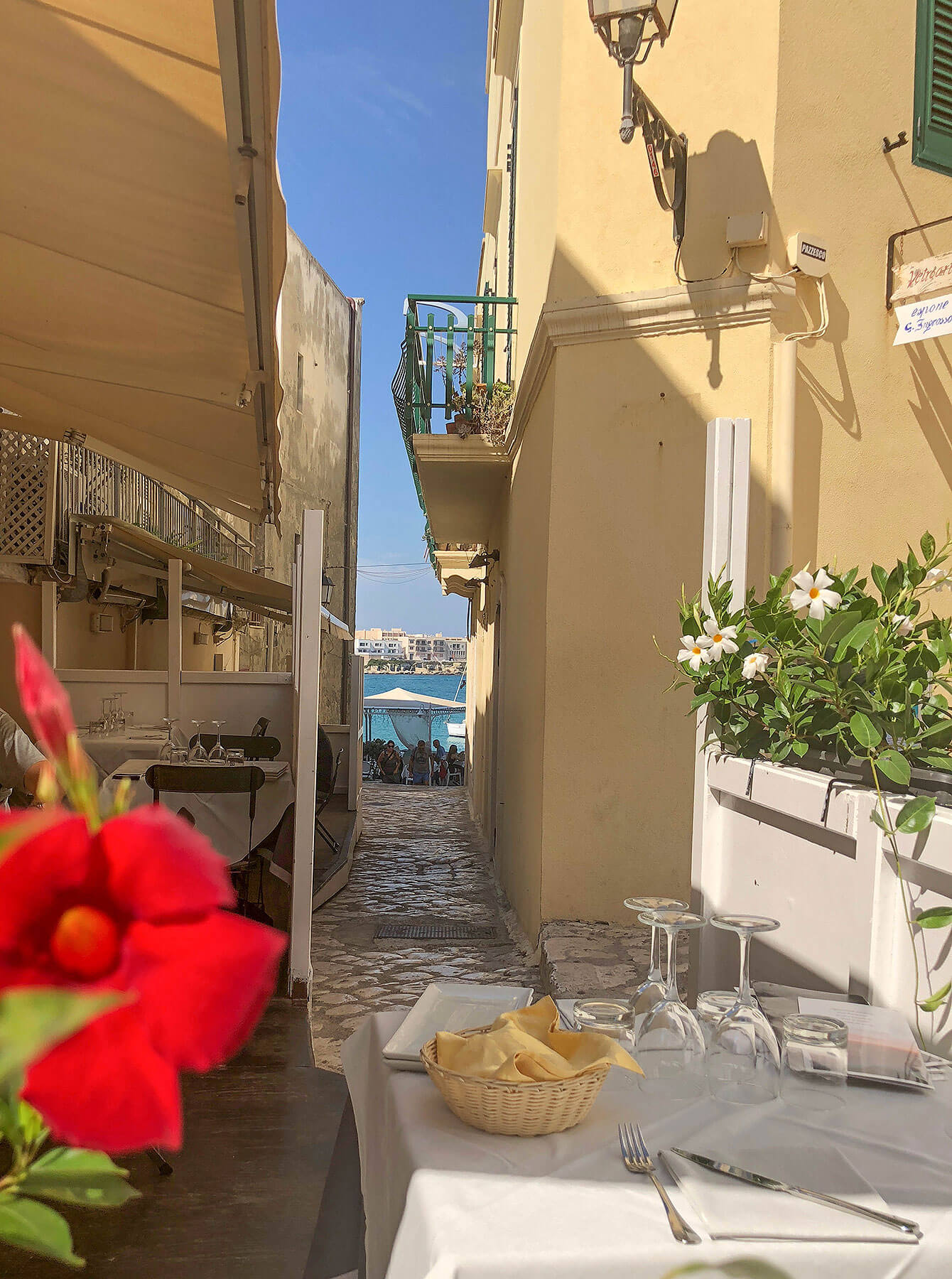 You will find one of the busier streets within the city walls provides you with souvenir shops, artisanal delicatessens and fashion shops. 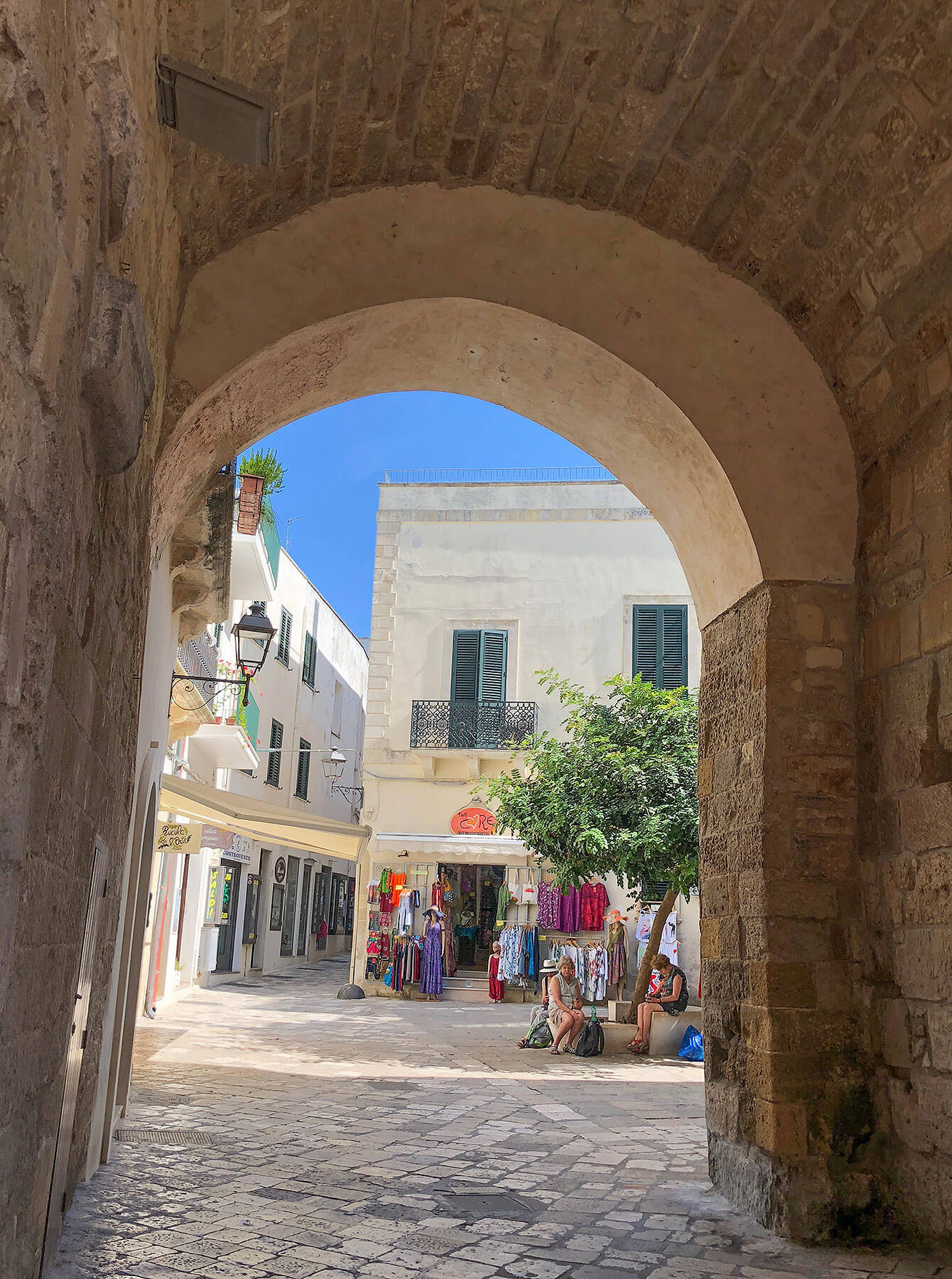 Don’t be shy and enter some of the churches you will pass. 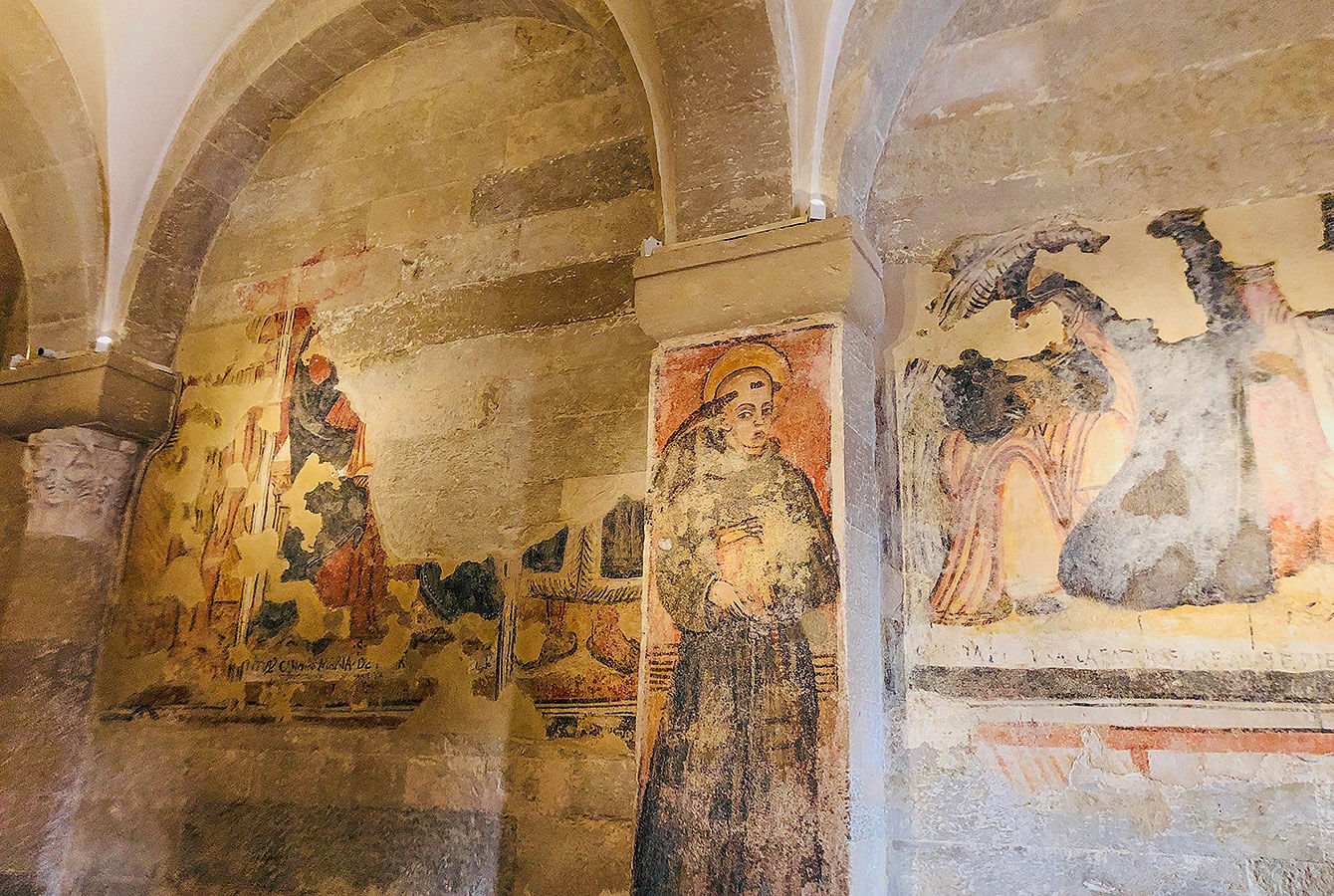 Painting in one of Otranto’s old town churches – Italy

The 11th-century Otranto Cathedral is a must. When we visited the mass was on so it was not possible to make a photo of the amazing mosaic stone floor. (No photos as the mass was in progress) 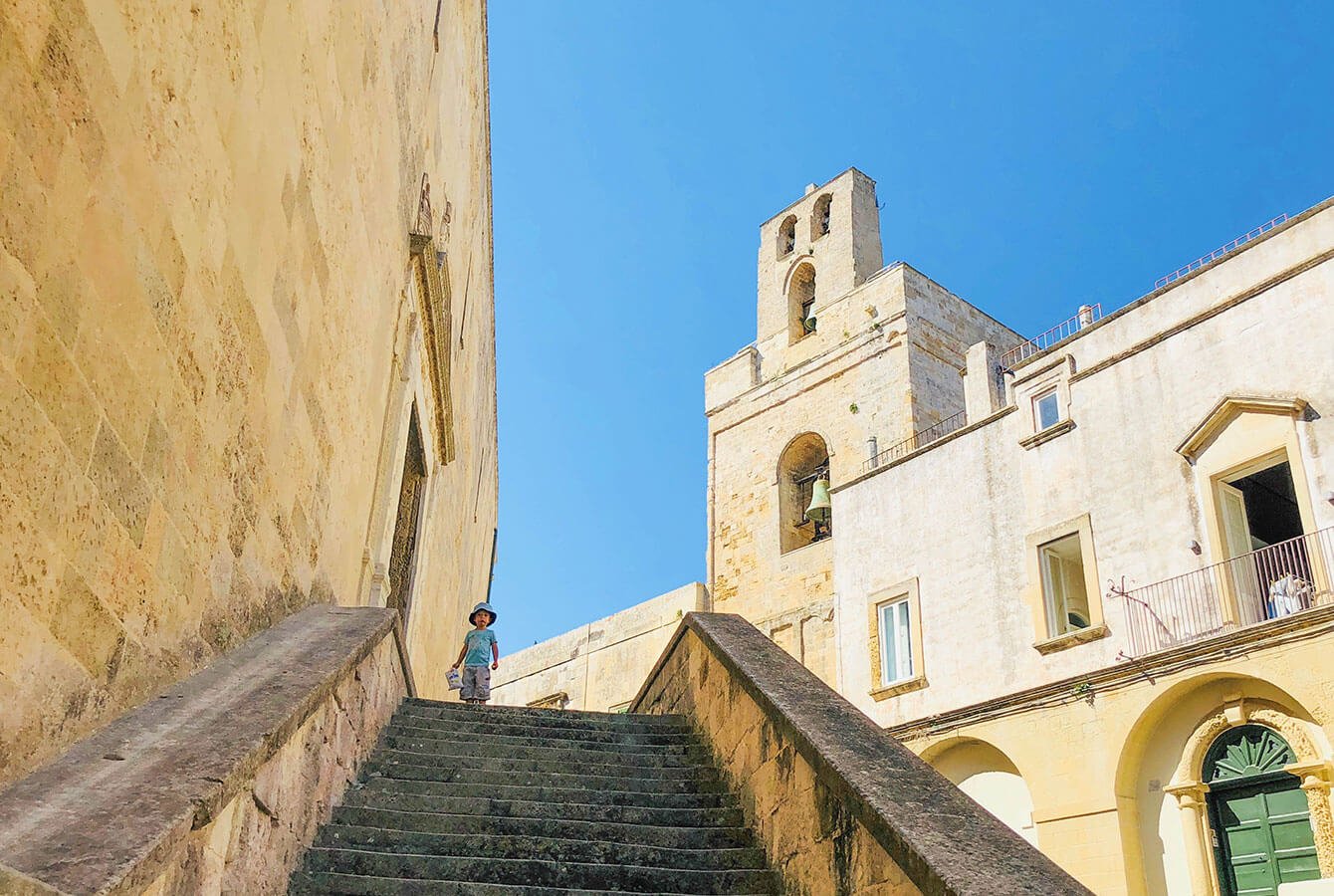 Within the defensive walls next to the Cathedral – Italy

You must take a seat and listen to the voice of the priests, even if you do not speak Italian. I always find the sound of their voices mixed with the echo from the church walls magical.

Your main focus point whilst within Otranto’s old town will be the Aragonese Castle.

Pay the 10-euro entry fee, you won’t regret it! And this is why! 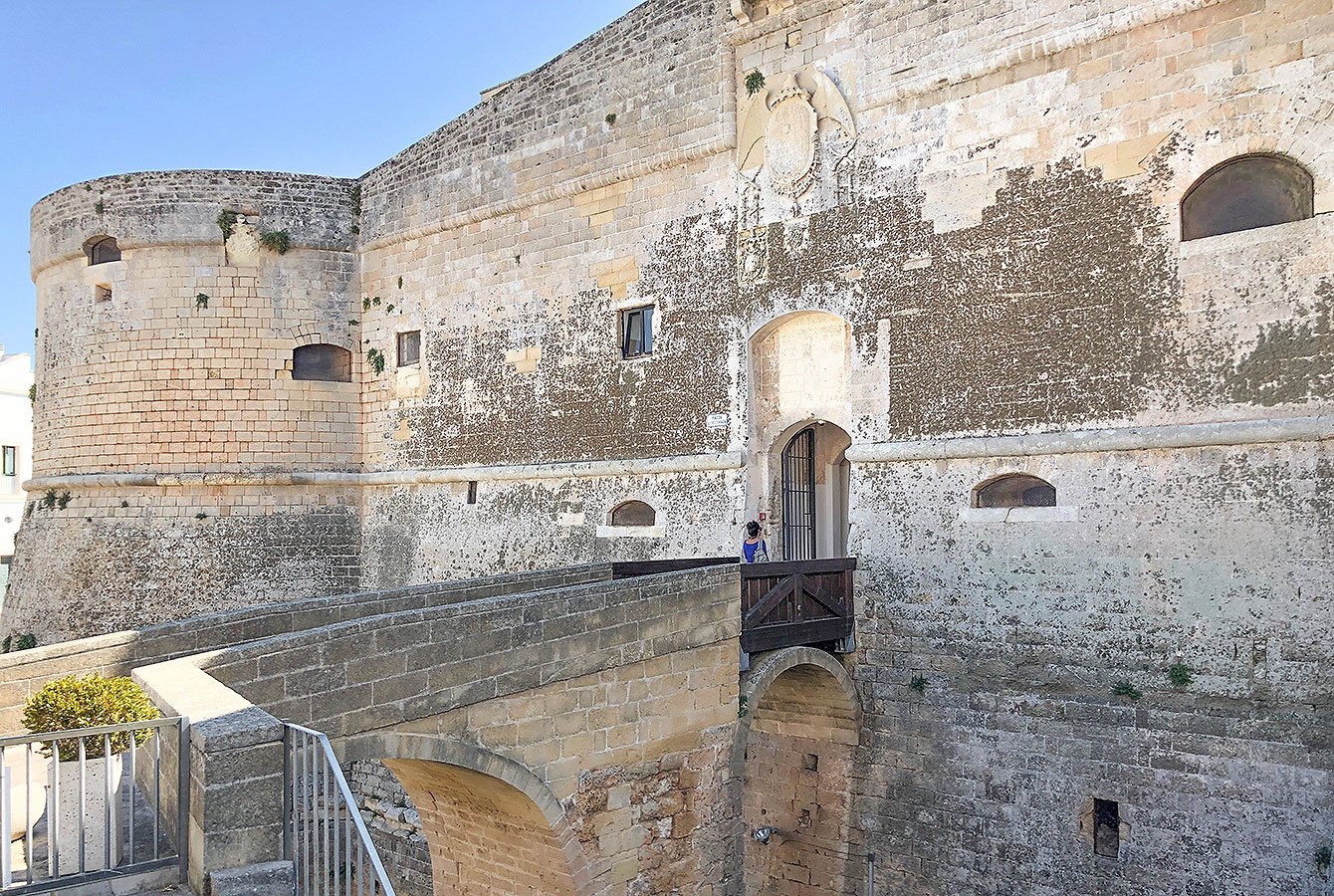 Enjoy a bit of history and some great views from the top over to the port. 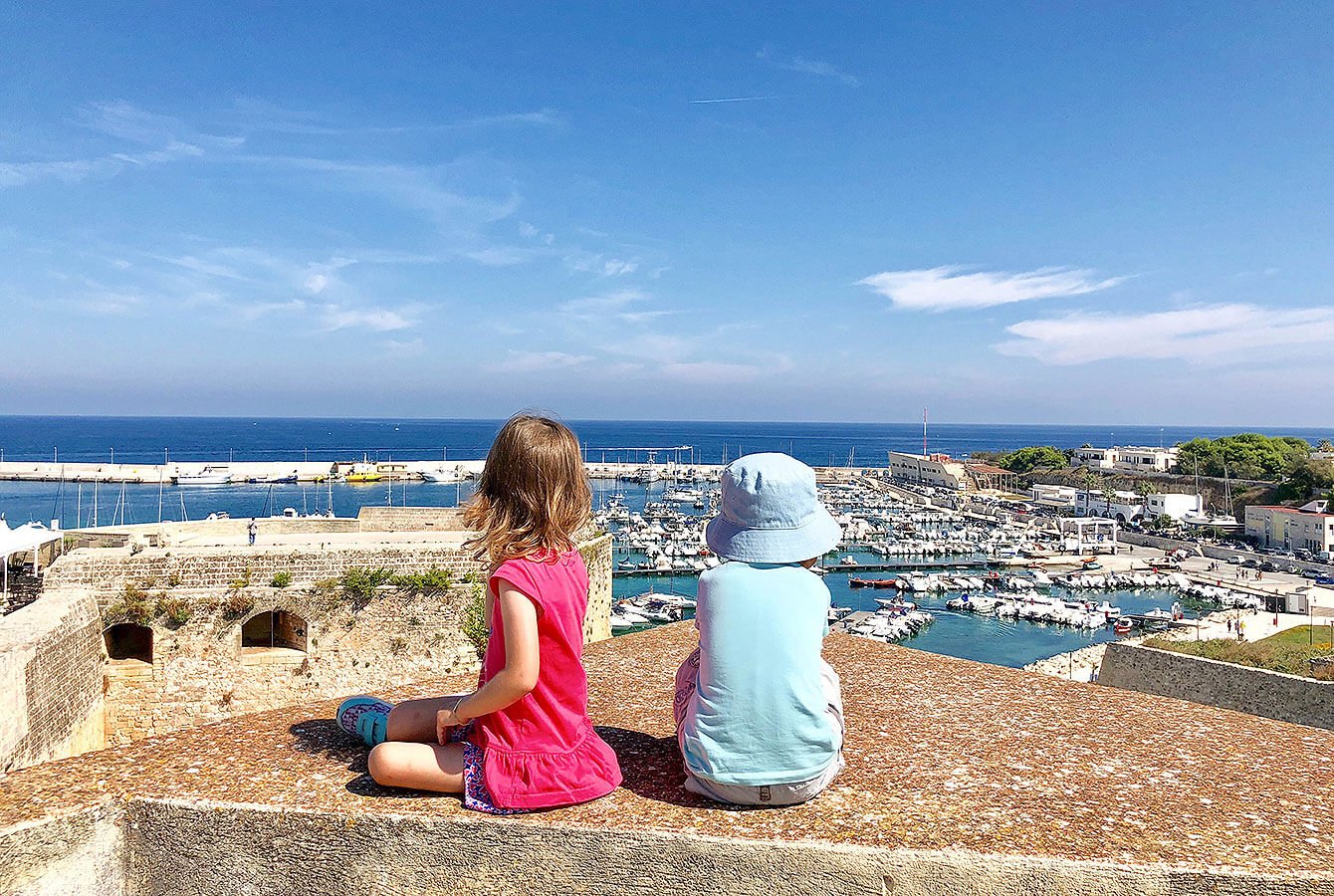 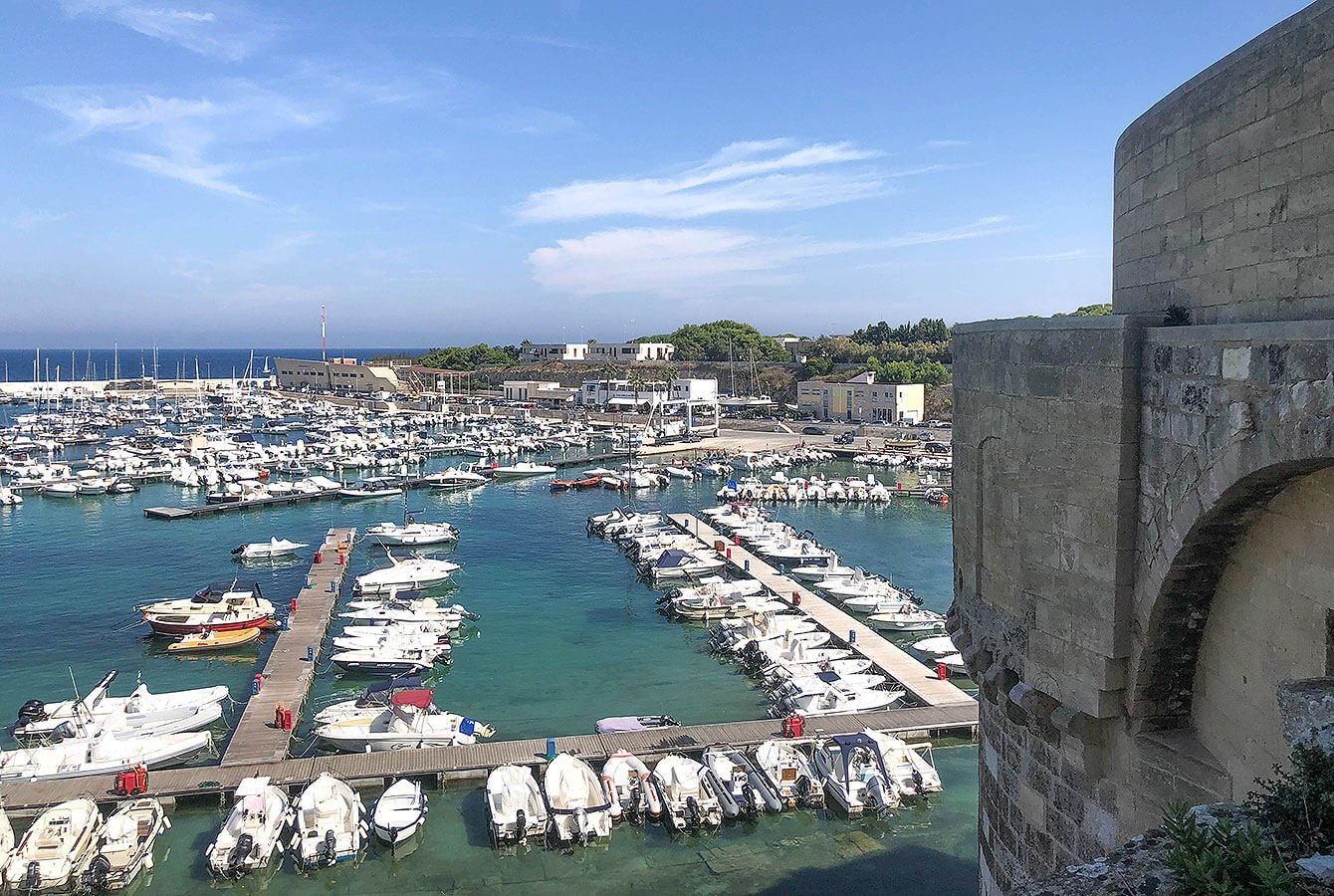 View over the Otranto Port – Italy 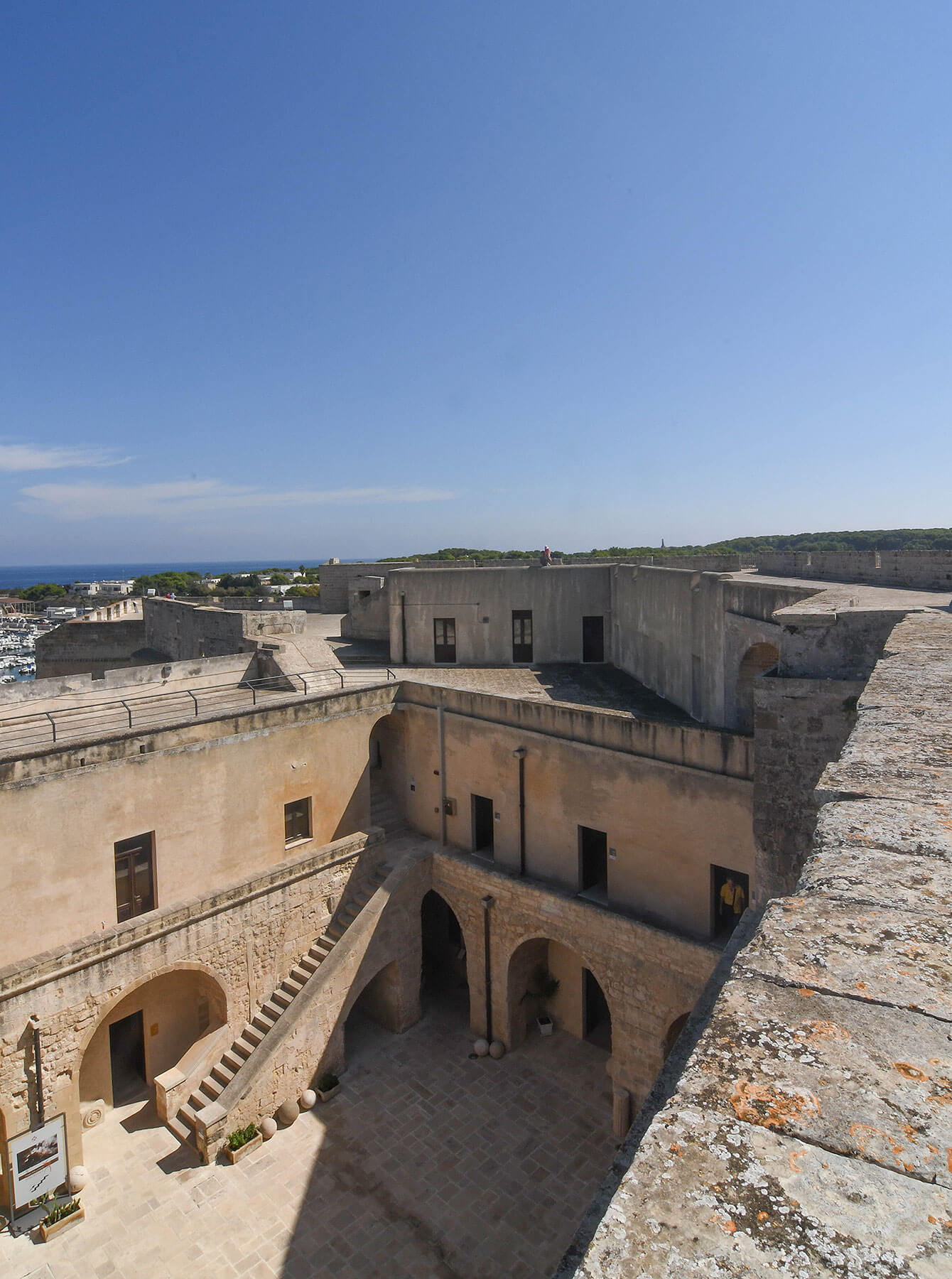 The building is the most important cultural structure of the city and hosts a permanent exhibition “Places of Prehistory”. Very informative. 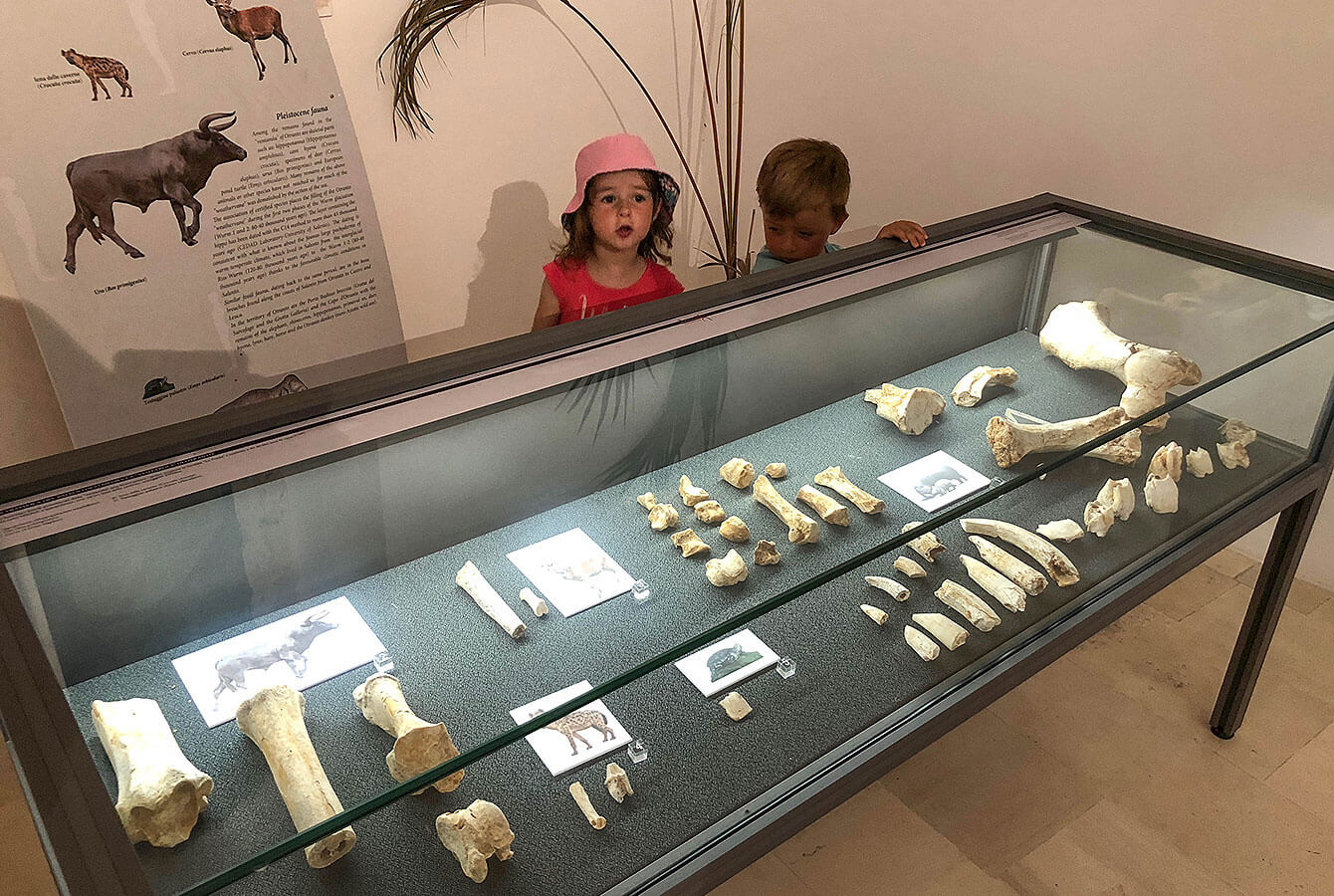 Exhibition within the castle “Places of Prehistory” – Italy 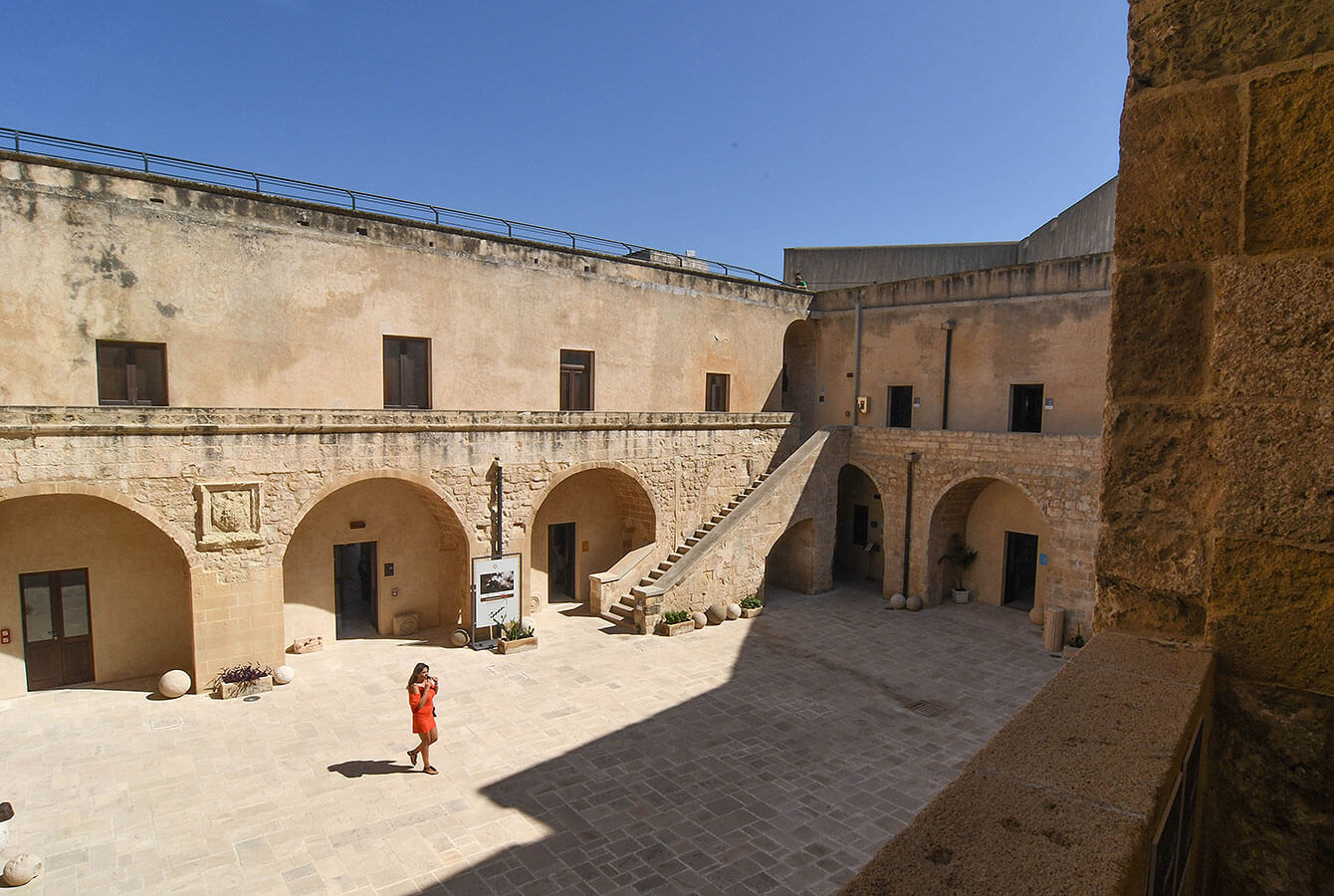 Still an original cannon and some stone  balls for a larger cannon are present. Apparently this larger cannon they used to defend themselves from the Turkish, is now in the UK Navy museum. 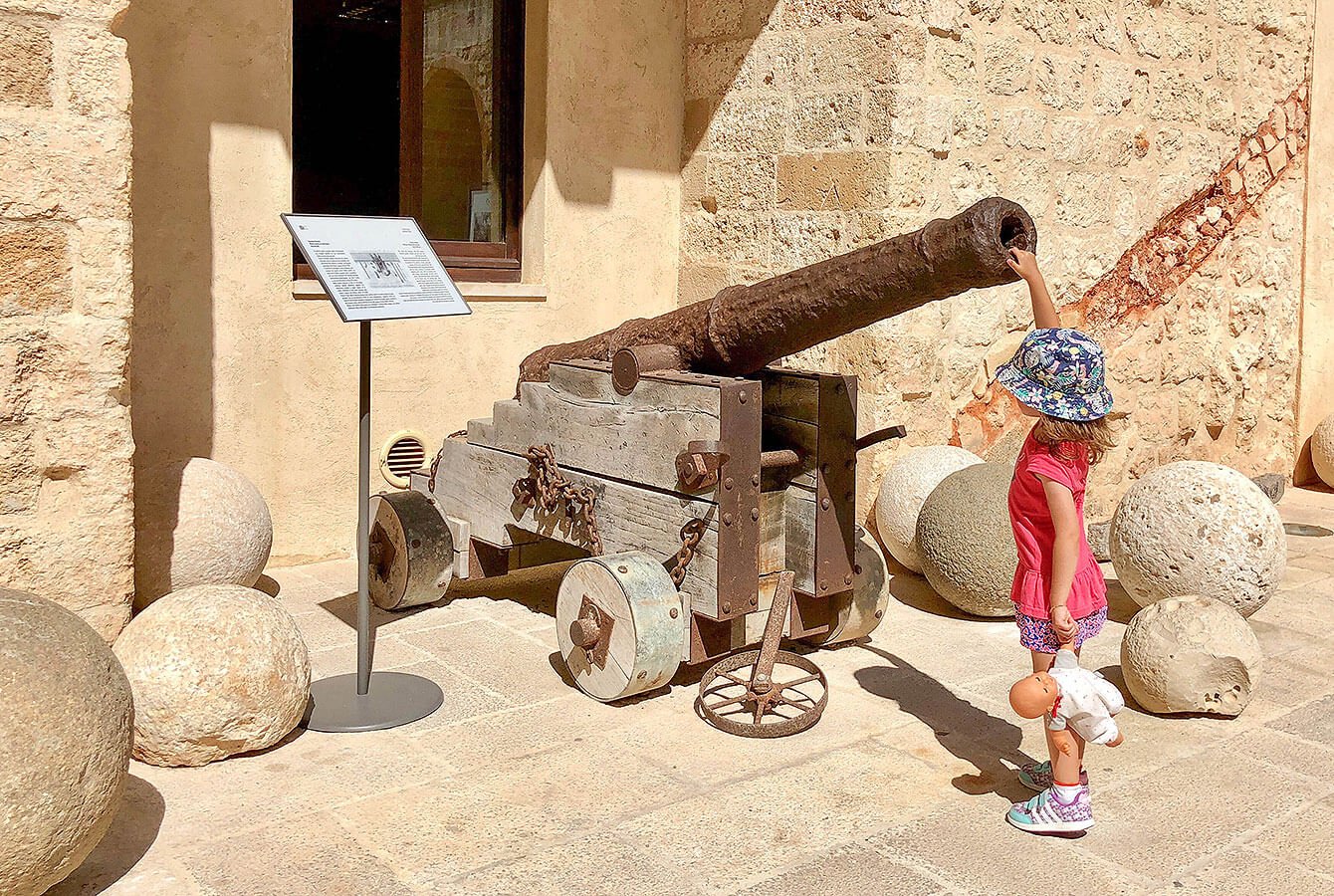 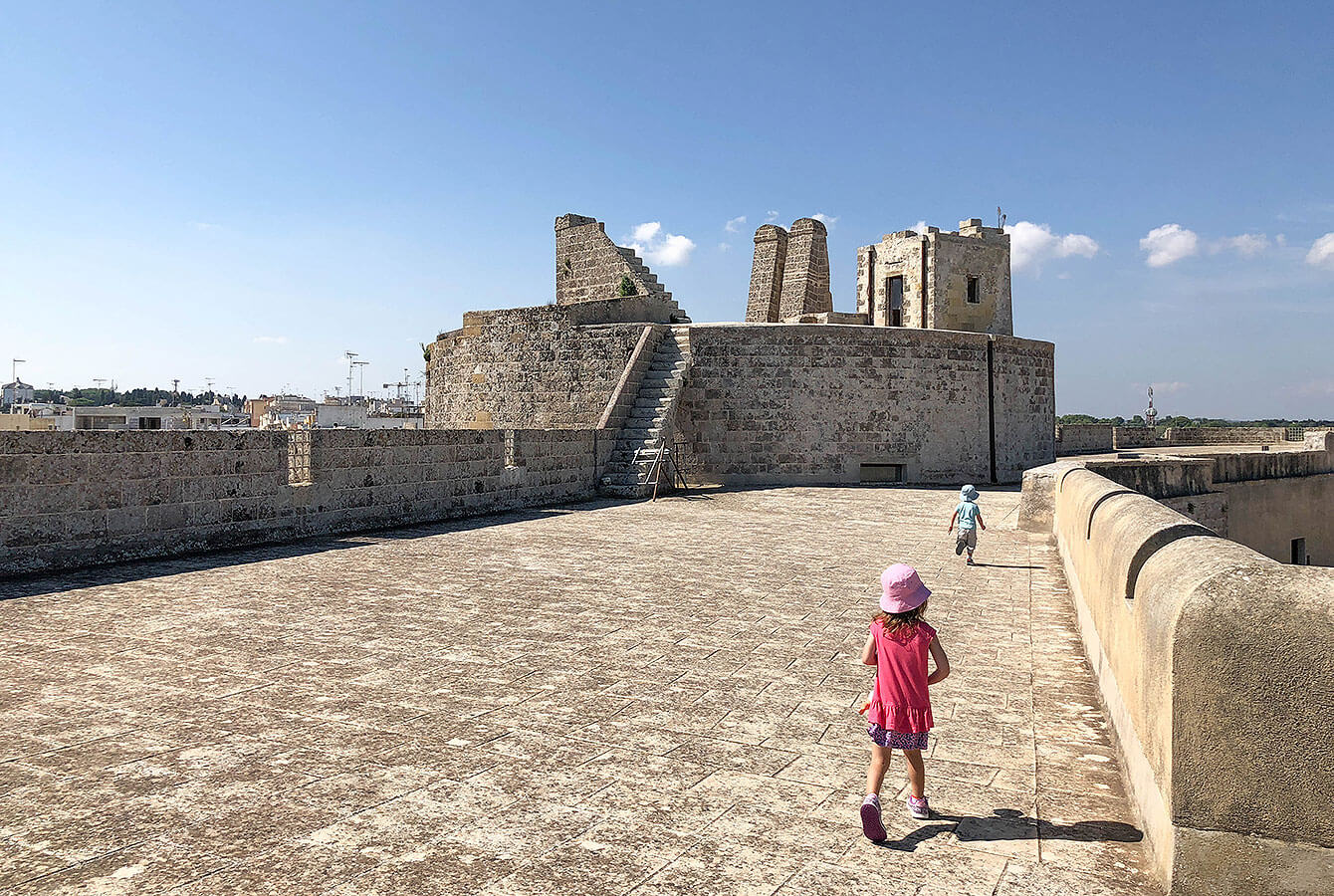 On the top of the Castle – Otranto -Italy

There are so many passage ways, hidden rooms and alleys throughout the castle. So have an eye on your little adventurers to ensure you do not lose them! 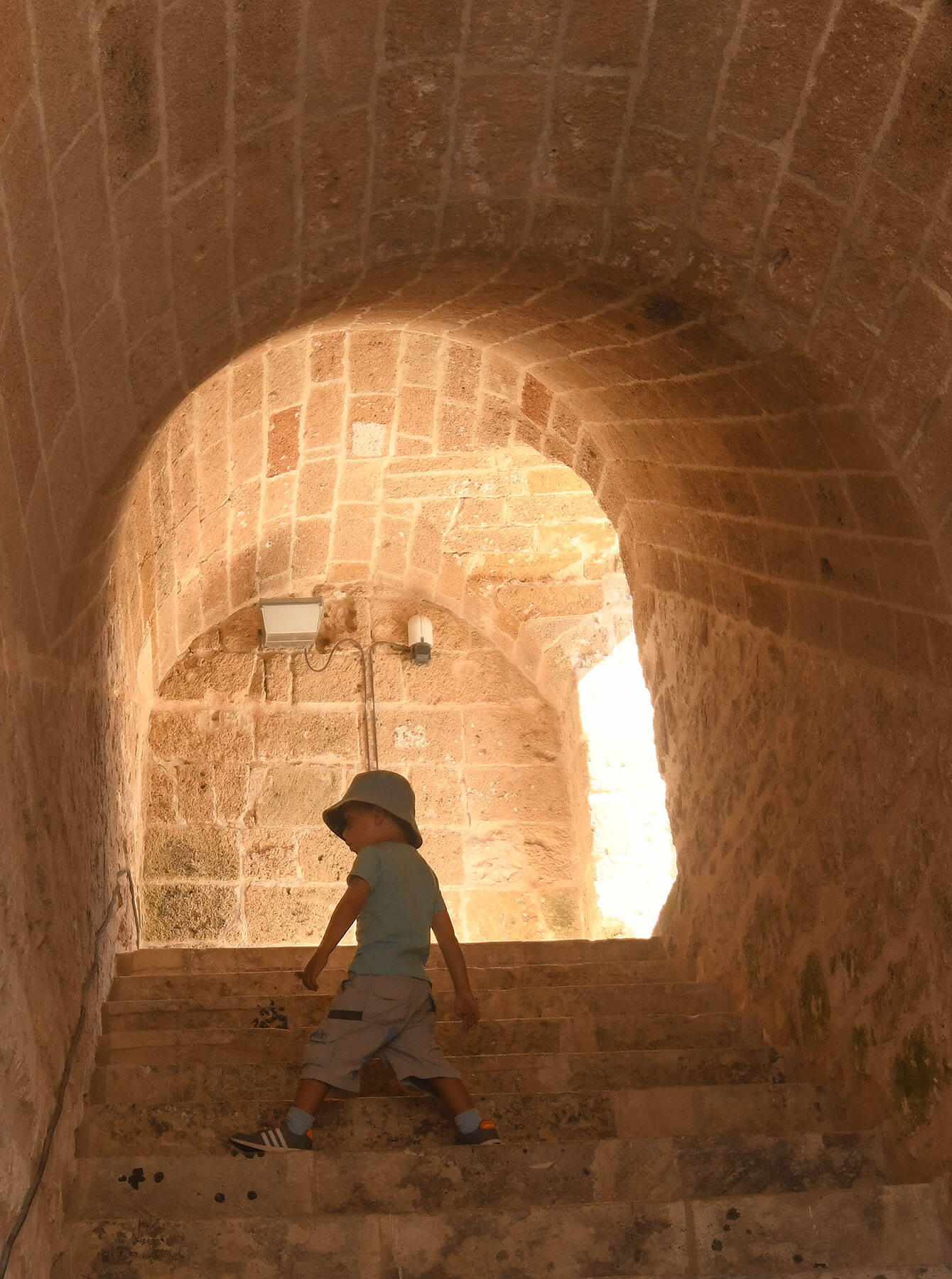 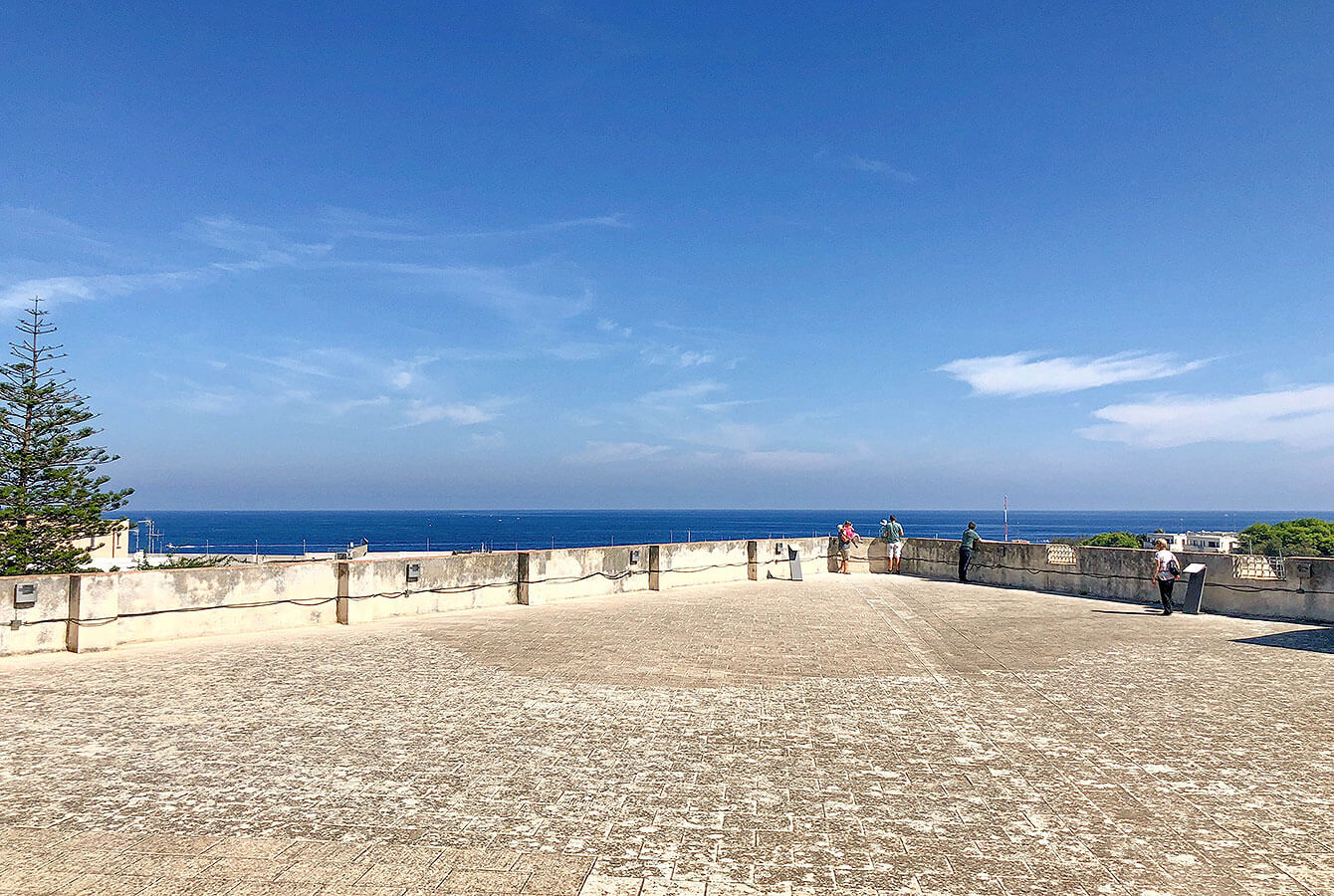 One of the rebuilt defence corners – ideal for observation – Otranto -Italy

We were asking ourselves about the round bumps on the ramp up to the Castles’ top. Easier to climb for the animals they have taken up to the roof for shelter during the attacks? Horses – Oxes pulling wagons loaded with heavy ammunition could keep their momentum? Who knows? Do you know? 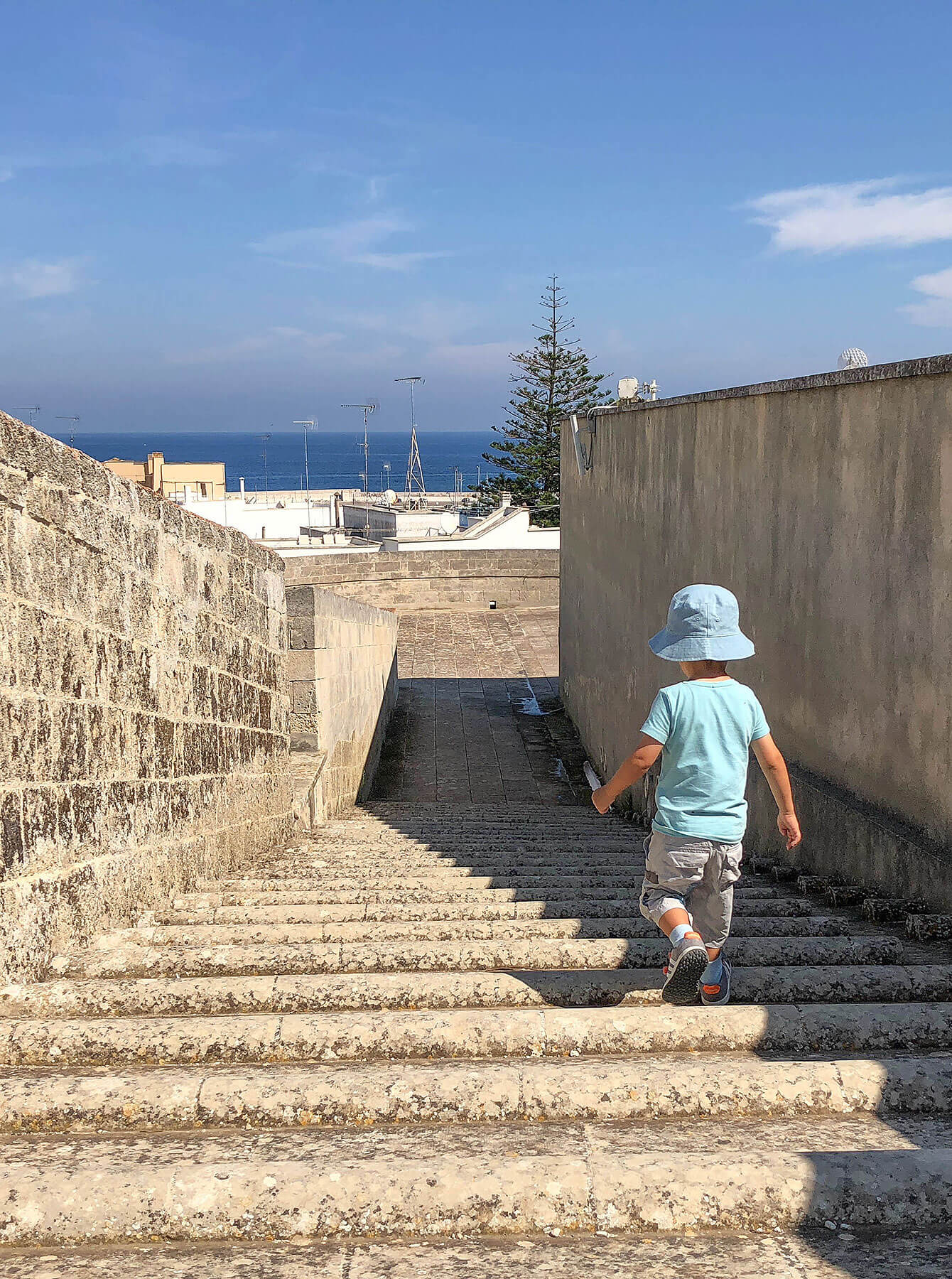 Rounded ramp steps up to the top – Otranto Castel – Italy

In one of the upper rooms they showing a video about dry stone walls. The video was ok, but it was a nice room to escape the heat and rest for a while. 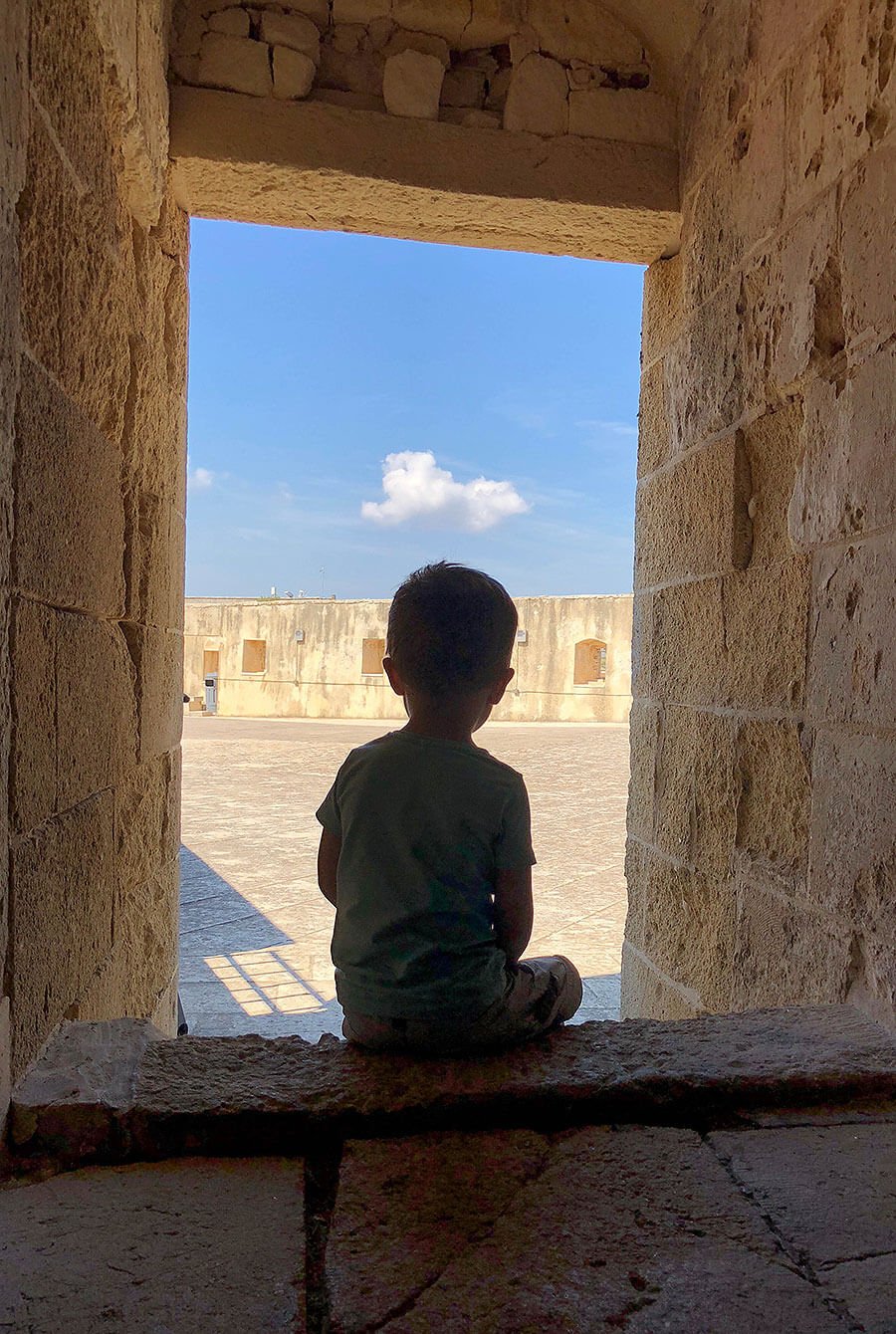 If you have any questions GET in Touch and Pin the E-books below for later.

Hi, my name is Corina, a mum of twins, a wife and founder of Packed Again – a Family Travel & Adventure Blog. We live in the most amazing mountain valley in Switzerland, the Valais.

It is outdoors where we feel the most connected and happy with each other.

The Blog will give you lots of information on Swiss Adventures and Beyond.